Why should I read an article about Affective Computing? 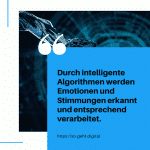 No question, computers are intelligent. But technology has no feelings? That is true, but it is becoming more and more empathetic. Intelligent algorithms detect emotions and moods and process them accordingly. This offers many new applications for artificial intelligence and supports you in both professional and private everyday life. Here we explain what Affective Computing is, where it is most commonly used so far and everything else, .

Intelligent algorithms detect emotions and moods and process them accordingly. 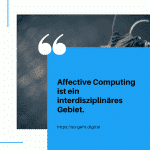 Affective computing is an interdisciplinary field in which insights from computer science, psychology and cognitive sciences are incorporated and combined. In order to develop machines that are not only intelligent, but can also correctly classify feelings, knowledge from all three areas is needed. In 1995, the term was coined by Rosalind Picard and has been continuously developed ever since.
Affective computing is based on machine learning. This trains the respective algorithm to recognize the feelings correctly and to react appropriately to them. The goal is to equip computers with emotional intelligence and have them simulate empathy so that an appropriate machine response to human action can be selected.

To recognize feelings, four different data sources are currently used. This can be visual data through images or videos, audio data, texts or physiological data. This allows the machine to recognize the basic emotions as well as to react appropriately to feelings that cannot be understood in words.
For analysis from image or video data, the technology evaluates people’s facial expressions. Facial analysis is particularly easy when a person is sitting in front of a PC or smartphone, as the facial expressions can be easily captured and evaluated via the webcam.

In telephone calls, on the other hand, audio data is used. Here, the speed, pitch and volume of the voice are assigned to the corresponding emotional condition. For example, if a person is excited, the voice usually gets faster and words are swallowed.
Similarly, texts are evaluated by sentiment analysis. They are divided into positive and negative texts by intelligent algorithms and thus also very extensive content is evaluated automatically. The mood of entire online communities and their attitude towards your company can be evaluated by the text data, for example. If negative comments and posts accumulate, this could indicate an impending shitstorm and give you early indications of countermeasures to be taken.

If none of the three data sources can be used, physiological data can also provide accurate conclusions about the emotion. The heart rate, the surface temperature of the skin and movement patterns, such as going up and down, can categorise a person’s mood. This data is mainly provided by wearables or smartphones. For example, if the heart rate is increased, the skin temperature is higher and the person moves jerky and aimlessly, this can indicate a negative emotional state, such as stress or aggressiveness.

In which areas is Affective Computing used? 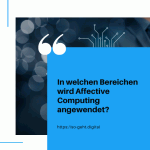 Affective computing now has many applications. In call centers, human phone agents are supported by artificial intelligence to provide even better service. This works by analysing the changes in language and tone and the appropriate tips on how best to respond to them. The desirable course of the conversation is thus controlled by intelligent algorithms. Or the customer is analyzed and classified by an upstream computer call and then assigned to a suitable agent specializing in mood. In this way, customers can be forwarded to apprentices in a good mood and those who have already shouted at the computer voice can be forwarded to customer service experts.

Chatbots also use affective computing to enable a natural conversation history. The same applies to other text-based interfaces, where emotional intelligence also avoids the feeling of writing with a robot and enables communication like with another human being. Smartphone sensors, smart home systems and various wearables are also likely to be increasingly enriched with affective computing in the future.

. This technique can be used in email communication with customers as well as in social media to analyze comments, moods of followers and attitudes towards the brand.
But affective computing is also used successfully in areas beyond customer service and marketing. In teaching, especially in online or remote education, the lack of personal interaction is compensated by affective computing. The mood of the student can be analyzed and the curriculum adapted accordingly and exercises selected appropriately. This can be helpful support for learning platforms, e-training programmes, but also for tutors and improve learning success.

Affective computing is also becoming increasingly popular in the healthcare sector, especially in the care of the elderly, due to the lack of staff. Emotional intelligence can assess patients and take or order appropriate measures. .
In the development of video games for entertainment or therapy, more and more technology of affective computing is also being incorporated. 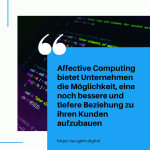 As you can see, Affective Computing is still in its infancy, but already offers numerous and useful applications. Related areas, such as biofeedback and human-computer interaction, are also constantly evolving, enabling even more possibilities and more sophisticated techniques. All in all, Affective Computing is already very accurate and in most cases manages to analyze feelings correctly.

Affective computing gives companies the opportunity to build an even better and deeper relationship with their customers. Through the precise recording of human behavior and the evaluation of emotions and movements, a comprehensive picture of the customer can be drawn and individually addressed to him and his current situation. Of course, there are also dangers. The enormous amounts of data must be processed and stored securely in order to avoid misuse. The privacy of the customer should also be respected, despite the great knowledge about him, and advertising measures should also be evaluated from an ethical point of view.

The field will certainly find many new and creative applications in the future, as a lot is happening here at the moment and new techniques and algorithms are constantly being developed. It is therefore worth sticking to current developments and considering where affective computing could support one’s own company.

Multichannel remarketing: How to get your buybacks back

LinkedIn Basic Knowledge: HowTo with Employee Advocacy in 4 Steps to...