The Dilts Pyramid in an Entrepreneurial Context 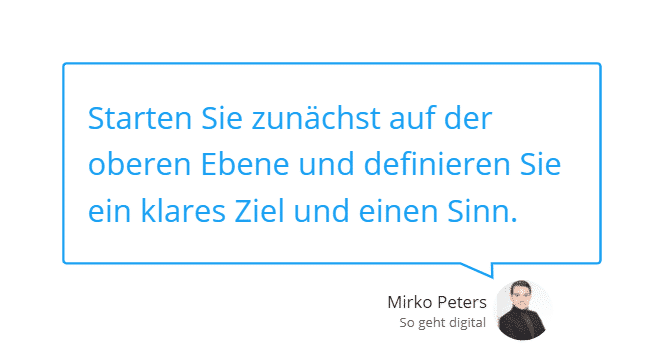 The Dilts Pyramid can serve as a model for shaping your digital transformation or for any changes you want to achieve at the organizational or team level. The Dilts Pyramid makes aspects transparent that most companies ignore in terms of change, goals, and problems, hindering success. For you, too, it is a guide in achieving goals and solving problems.

What is the Dilts Pyramid?

The Dilts pyramid comes from the NLP (Neuro-Linguistic Programming) and is also referred to as the “model of logical planes” or “NLP pyramid”. It was developed in the 1980s by Robert Dilts, one of the co-founders of the NLP. With this model, you can explain where a problem or target is located and thus contribute to the clarification and planning of intervention measures. In addition, the Dilts Pyramid describes change processes of people, teams and entire companies. It is built as a hierarchical model, with a higher level organizing and influencing the information of the underlying layer.

How is the Dilts Pyramid structured?

The Dilts pyramid consists of six levels that should be viewed from top to bottom.

The 1st level goals and meaning
The top level describes the “why?” and is a level of emotion. Thus, it is not visible and cannot be observed directly. This results in overlaps with system theory. The top level requires the lower level. It gives meaning and meaning to everything.

The 2nd Level Identity
The second level is about the self-image and the foreign image. It refers to emotion as one of the top three levels. “Who are you?” and “How do the others see you?” describe this level.

The 3rd level values and beliefs
The third level can be conscious or unconscious. It refers to emotion and requires the application of skills and execution of behaviors of people. This is where a person’s convictions and ideals lie. Values and beliefs can be asked with “What is (you) important?”, “What are you looking for?” and “Why?”.

The 4th Level Skills
The fourth level of skills can be accurately described, but is not directly observable. The layer refers to the ratio as one of the bottom three levels. Questions about this level are marked by “How?”. How do I do an activity? What skills are needed for this?

The 5th level behavior
The fifth level is behavior. The behavior is directly visible and also refers to the ratio. It describes concrete actions, all individual actions and reactions. Related questions include: “What?”, “What exactly is being done?” and “What action can an outsider observe?”.

The 6th level environment
The environment forms the basis of the pyramid. Each behavior is embedded in a concrete context. This layer is directly visible and writable and refers to the ratio like the two above it. With the questions “Where?”, “When?”, “Who?” and “With whom?” this level can be described. This also leads to overlaps with Bateson’s theory of learning.

Application and implementation of the Dilts Pyramid

Changes at one level can only be achieved if you start at least at that level, but better at the level above it. The Dilts Pyramid can be applied to yourself, to teams or entire organizations.

Using the Dilts Pyramid for yourself

For yourself, it is especially helpful for solving a problem or for supporting your goal achievement. Are all levels aligned with the goal and meaning? Is there a rebuttant somewhere? At what level do I communicate and where can I start? Go through the layers one at a time to find out where it’s ticking.

Use the Dilts Pyramid at team level

A team-level application option is for inconsistent behavior by your team members after announced decisions. The Dilts Pyramdie allows you to explain this behavior and take action at each level. At the lowest level, we need to look at the corporate culture. What context is there for the employees, is there an open error culture and a flat hierarchy in which they can question and express constructive criticism?

For the next two levels, it is worth addressing behavior openly, introducing communication training or moderation techniques so that your employees can learn to express concerns objectively and resolve conflicts. Up to this point, interventions are clearly visible and their success can be clearly assessed.

For the top three levels, you can have one-on-one conversations with your employees to learn about their beliefs and past experiences. You should act as a role model and show your desired values on a daily basis so that your employees can orientate themselves on them. You can also learn a lot about the identity of your employees in these conversations. Pay close attention to your language, where a lot is already revealed about their identity and at what level your employee or team communicates. Also, going through and explaining the Dilts Pyramid with your team can help your employees and you understand which level is most worth it to start at. Give them time! Especially in the upper three levels, interventions take time.

Using the Dilts Pyramid at the company level

At the enterprise level, you can use the Example of Digitization to take the Dilts Pyramid. Start at the top level and define a clear goal and sense. You can find thousands of arguments as to why digitalization is good on the Internet, but what exactly does that mean in the context of your company? What is the sense for you?

The second level is about the identity of the company. What is your self-image like? How are you seen from the outside? And above all: does this correspond to the image of a digitized company or is it worth taking a look at here?

In the third level, values and beliefs are questioned. Do they make it possible or even hinder it? It may be necessary to change or adapt beliefs here. The values of the employees must also be able to allow the goal of digitization.

In order to train the skills of the employees, training courses in modern communication channels or seminars on agile methods etc. are offered. The change in behavior can be observed in videoconferencing, using project management tools, and the like. Changes in the environment are again the most easily visible and valuable. This could mean a laptop for each employee to be more flexible or create digital touchpoints for customers. For the bottom three levels, this article probably won’t be difficult for you to find more examples and transfer them to your business.

The transformation of people, teams and organizations is characterized by six levels based on each other. However, there are no clear boundaries between the levels, especially in the upper area, these can blur with each other. Change processes that start higher up in the pyramid are more difficult and lengthy than those at the lower levels, but are particularly worthwhile for sustainable change. No matter what you want to change, you always ask the question of purpose and meaning: What are we doing this for? What are the advantages of change in the specific context of our company? In addition, plan actions at the other levels.

Unfortunately, many companies only started on the lower levels and believe that a fruit basket, a nice roof terrace and a table kicker (environment), dailys, slack communication and scrum teams (behaviour) or training and training in agile methods (skills) are already the solution to all problems. Without a clearly communicated goal and sense that is clear to everyone and that you and your employees stand behind, your company will not develop a new culture or mindset.

Multichannel remarketing: How to get your buybacks back

LinkedIn Basic Knowledge: HowTo with Employee Advocacy in 4 Steps to...